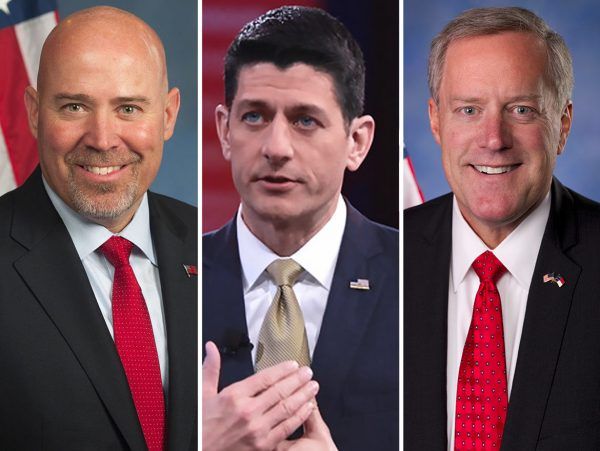 House Republicans are launching a new effort to repeal and replace Obamacare by amending the original plan offered by GOP leadership, called the American Health Care Act. A quick read of the proposed changes suggests the new bill simply doubles down of the cost-busting provisions of Obamacare while shifting more of the cost of Medicaid to the states.

The deal for the amended bill was reportedly brokered by the head of the House Freedom Caucus, Rep. Mark Meadows (R-N.C.), and the co-chair of the moderate Tuesday Group, Rep. Tom MacArthur (R-N.J.).

The so-called MacArthur Amendment would reportedly give states more flexibility to opt out of major provisions while also preserving popular protections like the law’s ban on discrimination against people with pre-existing conditions. Last week a Freedom Caucus source told CNBC the amendment would secure 25 to 30 “yes” votes from the organization and that the revised bill would get “very close” to the 216 votes needed to pass.

The AHCA is Obamacare with punctuation changed and with costs of Medicaid shifted to the states.

As a fiscal conservative, I had several reasons to oppose the AHCA then and now this amendment. The revised AHCA doesn’t prevent illegal immigrants from being placed onto Medicaid. It makes the HHS Secretary into a czar who can, in the next Democratic regime, put Obamacare (the Affordable Care Act) back into place. It won’t prevent 15 percent rate hikes in your insurance for the next three years, meaning you will pay for 45 percent spikes. This prediction by the Congressional Budget Office should be thought of as the floor, not the ceiling, of future premium increases. Remember: The CBO is often off the mark, but always in the same direction. They underestimate costs and overestimate revenue. There is no mention of insurance across state lines. There is no mention of “this is not a mandate.” There is no mention of “this is not a tax with penalties.” Drug price inflation, now about a fifth of the healthcare dollar, is not addressed. Malpractice reform also isn’t mentioned.

Ultimately, there is no “repeal” at all for Obamacare. The AHCA is Obamacare with punctuation changed and with costs of Medicaid shifted to the states.

The biggest and most problematic change is to Medicaid. The Medicaid portions of the GOP bill would fundamentally restructure the Medicaid program.

The Affordable Care Act allowed states to expand Medicaid, whose cost is shared between the states and federal government, to everyone with incomes under 138 percent of the poverty level. Previously, eligibility was restricted to those in specific categories (primarily low-income pregnant women, children, seniors, and those with disabilities). Because Medicaid was already a significant financial burden for states, the federal government offered to pay the entire cost for the expansion population for the first three years, eventually dropping back to 90 percent, which is still more than states get for traditionally eligible populations.

The GOP bill would end new enrollment in that expanded program in 2020. It would continue to cover people who had already qualified — but since many people in Medicaid go in and out of the program, the number of enrollees is likely to gradually decline.

But that’s just the beginning of the Medicaid changes. The Republican bill would, for the first time ever, limit the amount the federal government provides to states for Medicaid spending. It would make payments based on the number of enrollees in each state, and that “per capita” cap is expected over time to shift more financial responsibility for the program to the states. The states could be on the hook for an additional hundreds of billions of dollars over 10 years if the bill becomes law. How will states fund that cost? Tax increases, new debt, and benefit cuts.

Converting Medicaid to a per capita cap would also make the program highly vulnerable to more cuts in the future. If the president and Congress delink federal Medicaid funding from the actual cost of health care, they or future federal policymakers could come back and ratchet down the already arbitrary per-beneficiary caps. They could simply lower the annual growth rate for the cap amounts to pay for other federal priorities. The states would have to contribute much more of their own funding — or, far likelier — substantially cut eligibility, benefits and provider payments, with those cuts growing more severe each year. It means that those reliant on Medicaid will face a significant risk of ending up uninsured or losing access to needed care.

What will happen is that some states will “opt out,” while other states will stay in. But it won’t matter which happens. The actual cost of care won’t drop regardless of who pays for it. Both states and the federal government will be mismanaging the system.

The result will be strident calls to put people back onto the government system, which you might as well define as single-payer. This will cement the stage for national health care. Such a system gives all politicians the talking point that Americans have “access” to care. As we have seen in other single-payer systems such as the VA medical system, health care will be rationed and unaccountable while the actual cost of medical goods and services and the health care bureaucratic costs are hidden. The lack of a non-governmental system is sorely lacking from the AHCA, and that is what is desperately needed.

Dr. Ramin Oskoui, a cardiologist in the Washington, D.C., area, is CEO of Foxhall Cardiology PC and senior health care adviser to LifeZette.