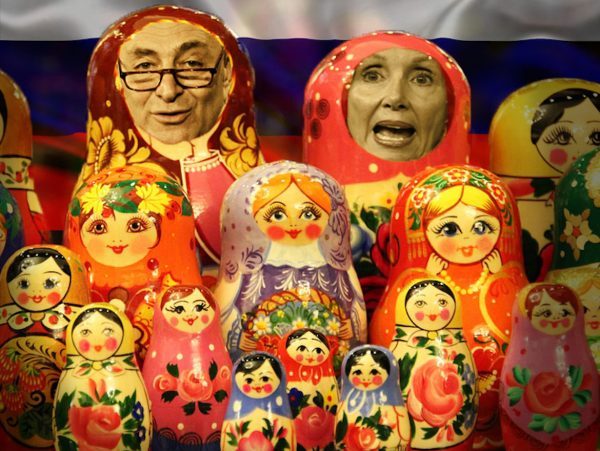 Taking aim at Senate Minority Leader Chuck Schumer first, Trump posted a picture of the Democratic senator from New York and Russian President Vladimir Putin eating a doughnut while Putin was in New York in 2003.

“I hereby demand a second investigation, after Schumer, of Pelosi for her close ties to Russia, and lying about it.”

“We should start an immediate investigation into @SenSchumer and his ties to Russia and Putin,” Trump tweeted. “A total hypocrite!”

Politico reported she had indeed met with Kislyak, and produced a picture of Pelosi and other House Democrats meeting with former Russian President Dmitriy Medvedev and Kislyak in 2010, when Medvedev was in the United States. Medvedev is a close Putin ally.

Trump saw a golden opportunity for a social-media broadside, as Pelosi now becomes the second major Democrat to falsely deny ever meeting with Kislyak. Both Pelosi and U.S. Sen. Claire McCaskill (D-Mo.) — had in fact met with Kislyak.

“I hereby demand a second investigation, after Schumer, of Pelosi for her close ties to Russia, and lying about it,” tweeted Trump.

Democrats targeted Sessions Thursday after it was reported that he had met twice with Kislyak in 2016. Sessions had indicated during confirmation hearings that he had no meetings with Russians as a member of Trump’s campaign.

But Sessions was adamant at a Thursday press conference that his meetings with the Russian ambassador considered nothing “improper,” nor did they discuss the Trump campaign. Trump, shortly before Sessions’ press conference, told reporters in a gaggle aboard Air Force One that he had “total confidence” in Sessions.

That same day, Pelosi and Schumer called for Sessions to resign.

For Trump, it was yet another attempt by Democrats to tie his administration to Putin. Democrats blame Russia for hacks last year that led to damaging revelations courtesy of WikiLeaks. The Democrats have repeatedly, with little evidence, asserted the Russians deliberately sought to aid Trump.

The attacks on Sessions, in particular, appear to go so far beyond what the evidence suggests. Trump called the hysteria a “witch hunt” and skeptics in the media took to panning Democrats’ “neo-McCarthyism.”

For one, the first meeting between Sessions and Kislyak was at the Republican National Convention in Cleveland, where dozens of ambassadors were invited to meet Republicans. In an especially ironic twist, the meet-and-greet was arranged by President Barack Obama’s State Department.

The second meeting was in Sessions’ Senate office, in September, and was agreed to at Kislyak’s request.

Sessions said they likely did not discuss campaign events, but did in fact discuss Ukraine, which brought a testy exchange.