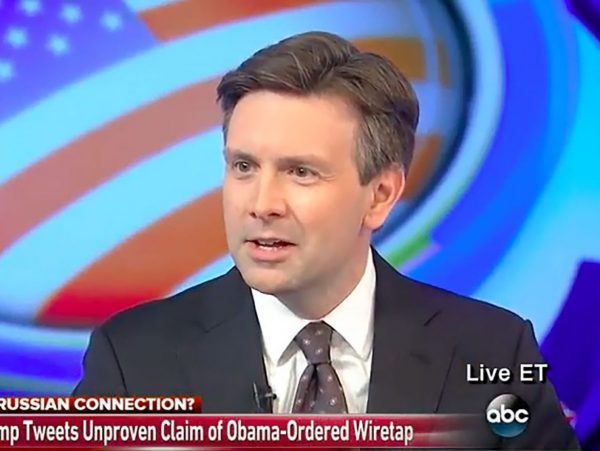 Former White House press secretary Josh Earnest claimed he didn’t know whether or not President Obama’s Justice Department sought and obtained a FISA court-ordered wiretap of President Donald Trump’s campaign in 2016 during an interview Sunday on ABC News’ “This Week.”

Obama’s former press secretary responded to assertions Trump made via Twitter Saturday that he had “just found out that Obama had my ‘wires tapped’ in Trump Tower just before the victory.” Obama spokesman Kevin Lewis said in a statement Saturday that “neither President Obama nor any White House official ever ordered surveillance on any U.S. citizen”; he neither confirmed nor denied whether Trump Tower was tapped by the Justice Department.

“Here’s the simple answer to that question, is, Martha, I don’t know.”

“Let me just remove the mystery here and explain to you and your viewers why it is false to say that President Obama ordered a wiretap of Trump Tower,” Earnest told co-anchor Martha Raddatz. “This may come as a surprise to the current occupant of the Oval Office, but the president of the United States does not have the authority to unilaterally order the wiretapping of an American citizen.”

Earnest proceeded to accuse Trump of using the wiretapping allegation to “distract” the country and direct its focus away from Russian connections and the 2016 election hacking.

“We know exactly why President Trump tweeted what he tweeted. Because there is one page in the Trump White House crisis management playbook. And that is simply to tweet or say something outrageous to distract from a scandal,” Earnest said. “And the bigger the scandal, the more outrageous the tweet.”

But Raddatz pressed Earnest further, drawing his attention to former Obama speechwriter Jon Favreau’s tweet cautioning against “reporting that Obama said there was no wiretapping” because the Lewis statement “just said that neither he nor the White House ordered it.”

“Can you categorically deny that the Obama Justice Department did not seek and obtain a FISA court order?” Raddatz asked Earnest.

Earnest initially deflected a bit, saying, “What I can categorically deny, Martha, is that the White House was at all involved in directing or interfering or influencing an FBI investigation of any sort.”

But the ABC co-anchor pressed further.

“That’s not what I’m asking. What I’m asking is, can you deny that the Obama Justice Department did not seek and obtain a FISA court-ordered wiretap of the Trump campaign?” Raddatz asked.

“Here’s the simple answer to that question, is, Martha, I don’t know,” Earnest claimed. “And it’s not because I’m no longer in government. The fact is, even when I was in government, I was not in a position of being regularly briefed on an FBI criminal or counterintelligence investigation. The White House — no one at the White House, including the president of the United States, should be in a position in which they’re trying to influence or dictate how that investigation is being conducted.”

After Raddatz asked him whether Obama was “ever given information about surveillance at Trump Tower,” Earnest said he was “not aware of all of the details of how the president was briefed by the FBI.”

“But what I can tell you is the president was not giving marching orders to the FBI about how to conduct their investigations. He was not asking for regular updates on FBI investigations,” Earnest added. “And let me just stipulate one more time, you have to ask the FBI whether there actually is an investigation into Mr. Trump, his associates, his campaign. That’s for them to talk about.”

Raddatz also took the opportunity to ask Earnest whether he could say that “no Obama staffers have been involved in leaks” that have been pouring out of the government since Trump took office. Once again, Earnest deflected.

“Martha, what I can tell you is that the men and women of our intelligence community are patriots. And these are professionals who have served presidents in both administrations. And they took an oath to protect this country and set aside their own political views,” Earnest said. “They deserve the support of the administration. They deserve the support of the White House. They don’t deserve to be attacked or accused of having a political motive.”