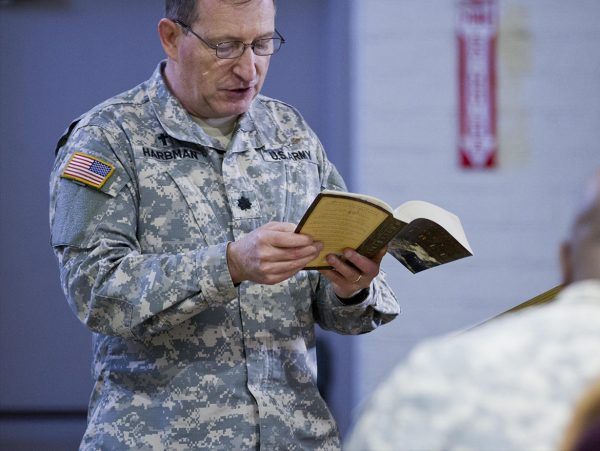 Thanks to a letter sent Tuesday to an Air Force base, military members were reminded of their constitutional religious freedoms.

First Liberty Institute sent a letter to the commander of a New Hampshire Air Force base to emphasize that prayer and Bible readings by chaplains at military events are perfectly acceptable.

They were very concerned their chaplains would infringe on their constitutional rights.

“We were simply clarifying to the New Hampshire Air National Guard that their practice of allowing chaplains to perform invocations on base for military ceremonies and other events is perfectly constitutional and something that has historically been done in our country since its founding,” Mike Berry, senior counsel and director of military affairs for First Liberty Institute, told LifeZette.

The First Liberty letter is in response to actions last month by a group that is pressuring the Air National Guard to take prayer off the schedule.

The Freedom from Religion Foundation, a Wisconsin-based atheist organization, sent a letter on Feb. 6 to Pease National Air National Guard Base in Portsmouth, New Hampshire, demanding religious observances not take place at ceremonies.

“A concerned guardsman contacted us to report that official Air National Guard ceremonies at Pease International Tradeport regularly include invocations led by a chaplain,” said Sam Grover, a staff attorney at the Freedom From Religion Foundation; he wrote of his concerns to Lieutenant Colonel Thaddeus Day of the 157th Air Refueling Wing Judge Advocate office. The 157th Air Refueling Wing is a unit of the New Hampshire Air National Guard stationed at Pease.

“These prayers regularly include readings from the Bible and references to the Christian god. We understand that attendance at many of these events is mandatory for guardsmen,” Grover wrote.

The organization views believes that allowing invocations at ceremonies violates the rights of those who do not wish to participate in religious rituals such as prayer. “Calling upon soldiers, their families, and other guests to pray is coercive and beyond the scope of a government entity like the Air National Guard,” Grover’s letter said.

The Chaplain Alliance for Religious Liberty, an organization that represents nearly half of all chaplains in the military, asked First Liberty to advise on this particular incident.

“They were very concerned that their chaplains were going to have their constitutional rights infringed as a result of this letter unless somebody clarified the law for the New Hampshire Air National Guard,” First Liberty’s Berry — a former Marine Corps judge advocate — said of the chaplain alliance group.

Related: Our Nation Has Been Uniquely Blessed, Despite What Polls Say [2]

“[I hope] the New Hampshire Air National Guard will disregard and ignore the Freedom from Religion Foundation’s letter and simply allow this practice to continue without any censorship or prohibition,” Berry said.

This is not an isolated case, Berry said, noting this “very troubling” piece of the story. “I think this incident at Pease National Air Base is indicative of a larger movement of hostility to religious freedom in our country.” Berry said such attacks against religious freedoms are happening at military installations in every branch of military, along with the fact that First Liberty has seen attacks against people of other faiths besides Christianity.

“We see chaplains threatened with career-ending punishment because they offer counseling in accordance with their religious belief,” Berry said. One case involved a First Liberty client who kept a Bible verse in her workspace.

“We represent a former United States Marine who was actually court-martialed and kicked out of the Marines because she displayed a Bible verse on her computer,” Berry said. “She was ordered to remove it and throw it in the trash, and she didn’t do that.”