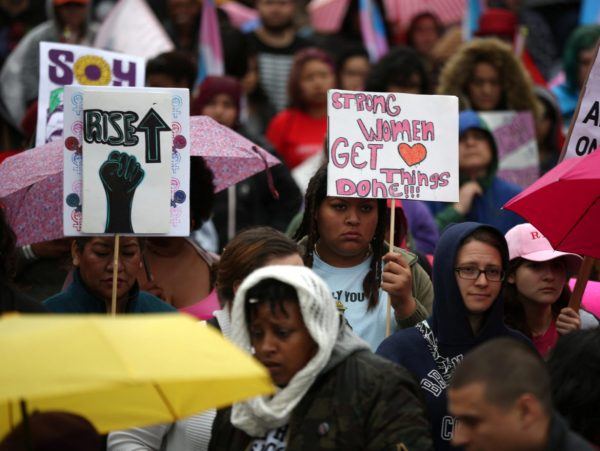 First, let me say right up front, as a woman, I have nothing in common with the whiny women who are staging this pout-out today other than, possibly, we have the same plumbing. I have taken pleasure for over 40 years in defining the difference between this type of woman and what I call a Renaissance Woman.

Renaissance women are winners, not whiners; leaders, not followers; and most importantly, victors, not victims. Either you are one or you aren’t. No one can turn you into one because it is a function of self-confidence, an optimistic view of the world, and a refusal to be intimidated, marginalized, ridiculed, or coerced into believing one point of view over another.

I remember years ago debating Gloria Steinem on “The Phil Donohue Show.” I learned as a young woman that there was no way I was going to change the mind of this entrenched feminist, who embraced socialist beliefs. So I addressed my concerns to the audience and appealed to them to think for themselves and express their own opinions, separate from these self-appointed spokesmen.

I must have hit a nerve with the audience because there was a pile-on against Steinem — and it was later reported that she was furious at Phil Donohue that he did not step in and defend her position.

Isn’t that rich? Here she is, a veteran TV personality, very much my senior, claiming women are strong and don’t need men — yet she whined when one didn’t defend her against a young novice who had only done one other TV appearance at that point.

That is who is marching today in America. They are privileged women who have had the luxury of spending four or more years in universities, sitting at the feet of their adored indoctrinators, who tell them they are victims and deserve safe places to be able to hear the echoed sounds of their own voices without trigger words that hurt their itty bitty feelings.

They should take the day to go shopping. At least they can do something positive by stimulating the economy.

Yeah, girls — that’s not reality. I don’t have the luxury of not working today because I run my own business and lots of people depend on me to be here. I would be hurting myself and real people, not some politician or political cause, by not working. These women are as embarrassing as the ones who wore faux pink vaginas on their heads the day after the inauguration of President Donald Trump, when they told everyone not to touch their private parts. Well, don’t wear them on your heads, you goofy women. These people demand respect yet show none for themselves. They want men to turn the other way when they march topless in the street and claim men are the ones with the issues when they happen to look at a topless woman. Seriously?

Who are these women and who in the world would ever hire them? They are the whiners who clog up a system, poisoning the atmosphere with their petty, selfish demands, and turn on a dime to accuse anyone of anything who doesn’t agree with them. They remind me of little wild animals that are cute to watch — until you get too close and they spring, biting your nose and clawing your face.

They have lost all credibility with real women, who just shake their heads with embarrassment at the rantings of the Ashley Judds and the Madonnas of their movement. Who on the Right could say they want to blow up the White House — and would not be sitting in jail today?

And why aren’t these women defending another woman, Ivanka Trump, who has endured major department stores boycotting her line? Why aren’t they marching in support of her? Isn’t that just blatant sexism and misogyny? Why aren’t they storming the doors of Nordstrom’s and Neiman Marcus, demanding these stores put her dresses and shoes back on the racks? Because she is not one of them — and thank goodness.

We can speak for ourselves, and our identity is not wrapped up in our sexuality, our political affiliation or our philosophical persuasion.

She is one of the renaissance women who got up today and went to work because dozens of people are depending on her to be the leader. She did not run to any organization or government agency to complain that she was a victim of a boycott. No, she put on her big girl pants and did what she does every day, including today — she went to work. Because unlike these women today who think they will be missed … Ivanka truly will be missed because she actually is creating, building, doing, making, expanding, influencing, and fulfilling her destiny as, yes, a Renaissance Women.

With that one example, we can see the distinction between the whiners and the winners, the leaders and the followers, the victims and the victors. And I can guarantee you that ALL those renaissance women are at work today, fulfilling their obligations, and making a positive difference in the lives of others. They aren’t out protesting, blaming someone else for their sad pitiful lives of empty anger directed at anyone who does not approve of their tantrums.

Look how these same women have trashed every conservative, Republican woman for years at the same time claiming they speak for all women. No, ladies, you don’t. We can speak for ourselves and our identity is not wrapped up in our sexuality, our political affiliation, or our philosophical persuasion.

We are different and each of us has our own ideas, opinions, beliefs and does not need a movement to break glass ceilings. We broke those years ago, but still operate in shadows of success because the liberal Establishment has determined strong women, who think for themselves, are dangerous and must be destroyed.

You can march and scream and cry and rant and rave all you want. Heck, it’s a free country. But do not claim you do that on my behalf against a man you hate, but who sits as the president of the United States, whether you like it or not.

Take a cue from the conservative women who lost twice to a man with opposing views to theirs. They kept their powder dry and reloaded in 2016 to elect people who understand that America is the greatest country in the world, one that promotes freedom of expression and the choice in the way that is carried out.

Travel the world and see how women in many other countries are treated — and decide if you would rather live there or not. Lots of people promised to move if Donald Trump was elected, but I didn’t see one moving van pull into Beverly Hills to take gilded furniture to Canada. So much for that empty promise.

They should take the day to go shopping. At least they can do something positive by stimulating the economy. I think I saw a new line of “big girl pants” in Ivanka trump’s fashions. I would suggest all these whiny women, who embrace the idea that they are victims, follow the example of real women and go buy a pair of those pants — online.

Nina May is a writer, producer, and director, and currently the showrunner on “Daily Bread,” a faith-based post-apocalyptic drama.