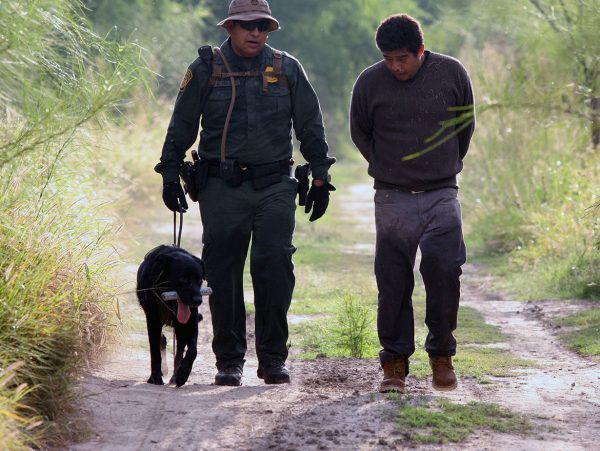 CNN commentator Ron Brownstein on Wednesday repeated an oft-made immigration claim: A border wall is unnecessary because net migration from Mexico has leveled off.

Brownstein, editorial director of the National Journal Group, made the observation during the panel discussion on CNN about President Donald Trump’s signature campaign proposal.

“It’s like saying I don’t have a problem even though I’m obese because I’m not getting any fatter.”

“The problem, itself, is enormously different than it used to be,” he said. “There’s not net migration from Mexico. In fact, the evidence is that there is net migration back to Mexico at this point.”

Experts agree that illegal immigration roughly has leveled off. Steven Camarota, director of research at the Center for Immigration Studies, said roughly as many illegal immigrants in recent years have been moving south from the United States as have moved north. If U.S.-born children and spouses are included, he said, the total number leaving has been higher.

But Camarota said after declining precipitously from its peak, illegal immigration from Mexico has rebounded somewhat in the most recent data. And he added that the discussion misses a larger point: If America succeeded at sealing the border, the illegal immigrant population would be shrinking rather than holding steady.

“It’s like saying I don’t have a problem even though I’m obese because I’m not getting any fatter,” Camarota said.

To critics of illegal immigration, the negatives associated with mass illicit migration are the strain on taxpayers and social services, the promotion of lawlessness, and the depressing impact on wages at the bottom of the economic ladder. None of these problems gets better merely by holding the illegal immigrant population steady.

According to a study by the Institute for Defense Analyses, illegal border crossings have been on the decline. But an estimated 170,000 illegal crossings still took place in 2015. The study includes estimates only for odd-numbered years. But assuming the totals in the even years are roughly midway between the odd years, the total number of illegal crossings during Barack Obama’s presidency was about 2.5 million.

That number includes some people who crossed more than one time in a given year. Even assuming the number of individuals was about 75 percent of that total, it would still mean that the illegal immigrant population — absent any other change in policy — would be almost two million people smaller today if the administration had succeeded in stopping illegal crossings.

Brownstein also made the dubious claim that most Americans reject the idea of a wall.

“The wall has never had majority support or anything close,” he said. “In polling, consistently from the beginning, a majority of Americans have said they oppose the wall.”

It is true that some polls show opposition to a wall. But that has been far from uniform. A Rasmussen poll taken just after Trump took office indicated that 48 percent of Americans supported it, while 46 percent opposed it.

Jim Acosta, a CNN reporter who was filling in for host John King on “Inside Politics,” also claimed it would be a massive about-face if Trump did anything less than build a wall along the entire southwest border.

“This promise is so central to his brand,” Acosta said, later adding, “To think that Donald Trump would settle for anything less than an actual, physical wall that rises up from, you know, the land that stretches from Texas to Arizona … that, to me, would be the ultimate — it would be, ‘Read my lips’ all over again.”

But that misstates Trump’s position. He has said he favors about 1,000 miles of barriers and specifically ruled out building structures in areas where mountains or water make barriers unnecessary or impractical. He also has shown flexibility on the specific form. Asked on “60 Minutes” [2] shortly after his election about whether he’d accept a fence, he said for certain areas he would.

There is a legitimate debate about whether a wall would work or whether it is the smartest way to address illegal immigration from Mexico and Central America. But the panel discussion on “Inside Politics” simply misstated Trump’s position and pretended illegal immigration is not a problem because a lot of people are returning home.

A report by the Center for Immigration Studies earlier this year concluded that savings to taxpayers at all levels of government eventually would exceed the cost of a wall [3] if it stopped even a small fraction of crossers.

“Treating it [illegal border crossings] makes a lot of sense,” said Camarota, who wrote the study.