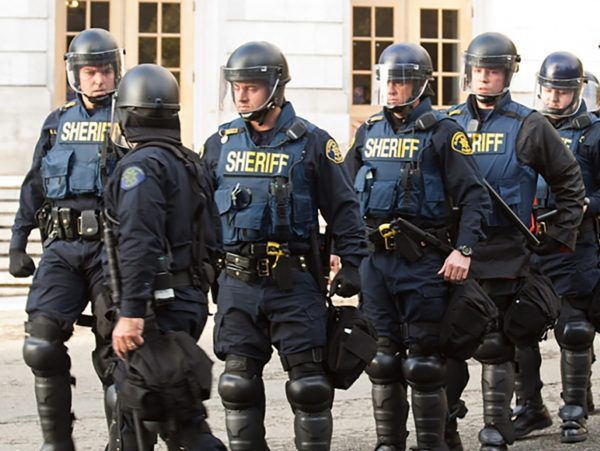 Being a police officer has never been a leisurely stroll in the park. A job in which you swear to lay down your life for another implicitly spells D-A-N-G-E-R. So it really comes as no surprise that cops feel their job is more difficult today, with the national climate on the fritz. Under the tutelage of the Pew Research Center, a survey called “Behind the Badge” was conducted by the National Police Research Platform. The intent was to gauge cops’ sentiments about their profession.

The survey group consisted of some 8,000 male and female cops from 54 law enforcement agencies around the nation, with a sworn contingent of 100-plus officers.

Currently, there are almost 1 million cops in America. Despite the size of the survey group, there is no denying how increasingly hazardous policing can be, especially lately.

Survey highlights indicate some interesting dynamics and opinions of cops, but the gist overall remains race relations and how to achieve optimal interactions between police and African-Americans. Some findings may surprise you; others may not. Nevertheless, the core of being an American is being responsible — to oneself and each other — and accomplishing many great things.

What Are We Doing to Make the Job Less Difficult?
With soon-to-be confirmed Attorney General Jeff Sessions in the wing, police have good reason to believe he will parlay positive change, and rightly so. Sen. Sessions (R-Ala.) made supportive statements pertaining to the law enforcement community and has candidly described how society has severely maligned the unwavering efforts of cops.

A new justice earmarks a “police first” mentality and ebbs away from the former knee-jerk, stone-throwing, anti-cop rhetoric we’ve seen throughout recent years.

Our 45th president appears wholly supportive of law enforcement, so there is solace in knowing he intends to harvest principles in policing and not go the way of the former commander-in-chief. As a presidential bidder in 2015, Trump stated that, should he win the White House, he would endorse an executive order mandating an automatic death sentence for anyone who murders a police officer.

It is called the Blue Lives Matter Bill, and Louisiana was the first state to legislate the killing of a cop as a hate crime. Texas seeks to follow suit with a bill it calls the Police Protection Act. Florida’s Thin Blue Line Act (SB 115) is on the table for legislative consideration and includes all public safety first responders.

Indiana Senate Bill 285 essentially aids the police and removes hardships by legally authorizing them to clear protests that impede traffic (your right to move freely). “By any means necessary,” this bill enables cops to remove or arrest resisters without impunity. Let’s hope the rationale is contagious.

Families everywhere can instill in their children the values of trusting figures of authority and always echo that cops are going to help them when needed. Seeding rotten narratives perpetuates more rotten narratives — a cycle we can eradicate. I had that guidance and encouragement when I was growing up in Brooklyn, New York, and am grateful for the direction. So much so that those seeds bloomed into a passion to not only respect police officers but to bleed my knuckles to join those very ranks of men and women.

For their role, police entities are reaching out, educating the public and answering questions with candid answers regarding procedures and protocols. Two such examples having widespread success across the nation are the Citizens Police Academy and Coffee with a Cop, whereby cops facilitate education and action demos for civilians interested in the dynamics of policing.

Train, train, train! As in any profession, the more training the better. Throughout the years, police agencies have been restricted in training sessions, often citing budgetary shortfalls. However, many have recognized the need to allocate necessary funds to train police empirically and consistently.

Naturally, good old-fashioned support and encouragement always make a difference. In a recent poll of Americans and their sentiments about the police, Gallup found that nearly 76 percent respect and praise the police for the arduous life-threatening work they do.

Obama Compounded Police Work
Labeled the “commuter-in-chief” in a recent article published in LifeZette [2], former President Obama has pardoned a whopping 1,715 prison inmates who would otherwise be deemed as non-contributory to a society focused on reinvigorating itself. Their convictions underline the very reasons they were jailed in the first place. Liberally pouring them back on the streets exacerbates cops’ jobs and most certainly endangers the public.

The National Association of Police Organizations (NAPO) rebuked Obama’s mind-boggling appointment of Debo Adegbile to lead the U.S. Commission of Civil Rights. Who is Mr. Adegbile? He is an indiscreet individual who historically cast anti-police fodder, including freeing a cop killer.

It was Obama whose legacy for skipping eulogies at churches and cemeteries is indelibly burned into the psyches of police families. When murdered police officers all across the nation were being commemorated for “the ultimate sacrifice,” it was Obama meeting criminal suspects’ families that the media publicized more widely. When cops were being vilified, suspects were somehow heralded and treated as prophets. Rather obscurely, cop after cop was laid to rest. The inversion is disheartening.

Law enforcement officers do not toot their own horns, but sound the trumpets when truly evil organisms are shackled and public safety is achieved.

The Obama administration took positions on the sidelines while the usual suspects were on the loose; some citizens continually deny self-responsibility, some folks wish to rewrite laws to suit themselves, the media’s big fan flames misinformation like wildfire, and social media spreads distortions of the truth. Outtakes/snippets of police encounters incite anti-police sentiment, politicians pander and take up the wrong fight, and the cycle repeats itself like a Ferris wheel without an off switch. Misguided contempt festers, and cops pay dearly.

Perspectives
After five of his officers were gunned down by a sniper in July 2016, Dallas Police Chief David Brown summed it up quite well when he said the tensions between police and minority communities exist because we ask the police to do so much and ask too little of ourselves (citizenry). The they-knew-what-they-signed-up-for argument often spewed at the police profession is laden with apathy and deflects personal responsibility.

As of this writing, 10 law enforcement officers were added to the line-of-duty deaths, exactly half killed in gun battles. Ten sworn warriors perished between Jan. 1, 2017, and President Donald Trump’s inaugural ceremony.

While police agencies across the nation encounter difficulty in hiring police candidates and alter recruitment efforts by implementing some hefty sign-on bonuses, the roles are still down. And please do not be fooled by former President Obama’s agenda to lower police standards so that minorities can have an opportunity to become cops. That is most certainly backwards thinking, no matter the pigment. That chapter is concluded, and it is time to turn the page with a new attorney general in office who evinces support for police and sympathizes with their duty-bound rigors.

Perhaps placing an exclamation point here underscores how pervasively dangerous and difficult police culture is; while describing the 10 line-of-duty-deaths above, another one was added. At 6:30 a.m. on Inauguration Day, 26-year-old U.S. Marine Corps veteran and rookie policeman Michael Louviere, of the Westwego, Louisiana, police department, finished his midnight shift. He was driving home to his wife and young children. Off-duty yet still in uniform, Officer Louviere came upon what he perceived to be a traffic crash. He was partially correct. The crash stemmed from a domestic violence incident in which the female fled and wrecked in her haste to save herself.

Officer Louviere exited his car to render aid. He saw an injured female, and that was his final vision. Execution-style, he was shot in the back of the head by the male assailant involved in the domestic encounter. The shooter then turned his gun on the woman, killing her where she sat, leaving both bodies on the road.

Instantaneously, several lives were obliterated. Hard being a cop? It has little to do with the low pay scale, thanklessness, and demanding hours. It has far more to do with depraved humanity often shrouded by deception and fueled by unbridled hatred. No one-size-fits-all answer exists. It is hardly applicable to devalue anyone who puts a hand in the air and swears an oath on everyone else’s behalf — only to face chronic and misguided scrutiny or character assassination or physical assassination.

Via an excerpt from its Instagram account, the @policewivesunited page explained it with heart-wrenching candor: “Ask yourself how in the world do our HEROES walk out the doors of their homes, leaving their loved ones, day after day to serve and protect a society who equally loves and hates them? They face monsters who have been allowed to execute officers — our HEROES, with no consequences and in most cases approval from our highest government.”

Before publication time, I hazard to think I may edit the number of cop casualties referenced in this article. I do not know that I will. I do know that law enforcement officers do not toot their own horns but sound the trumpets when truly evil organisms are shackled and public safety is achieved, despite how onerous it may be.

Related: A Message to Those Who Would Kill Police K9s [4]

I have hope. Ushering in our 45th president at least brings a can-do spirit from a leader who consistently publicized how demoralized our nation’s police force has become, followed by his words of encouragement and unwavering support. From a city with our country’s largest municipal police department (NYPD), President Donald Trump has witnessed the harsh realities of working the streets. He knows well how law and order are constitutional tenets to enforce and measurably ensure, not merely three words to spit out when sound bites seem appropriate.

I suppose a police survey offers us number-crunching measures. Yet the beat goes on, often unquestionably, with a terrifyingly beating heart. Cops’ hearts are in the game, nevertheless. Whether the nation stands behind them is up to each individual, whose freedom to support is the very vortex that cops are entrusted to constitutionally guarantee, despite how mined the field may be.

Among several, one particular Bible verse conveys the police role quite well: “Give justice to the weak and the fatherless; maintain the right of the afflicted and the destitute. Rescue the weak and the needy; deliver them from the hand of the wicked” (Psalm 82:3, 4).

What I always found to be the hardest part of police work was the unknown variable: Will I get to see my family again at shift’s end? It’s safe to assume Officer Louviere thought he had that answer … until he pulled over to make life easier for another, never knowing getting to see his loved ones again was a passing thought. Wondering about making it through the shift is the hardest part, not the ridicule or criticism or scrutiny or condemnation or Monday morning quarterbacking or donut jokes.

As a nation, let’s suit up and strive for the good of all; we can hardly afford to waste time. A new day dawns.

Stephen Owsinski is a retired law enforcement officer whose career included assignments in the Uniformed Patrol Division and field training officer (FTO) unit. He is currently a senior OpsLens contributor, a researcher, and a writer. This OpsLens article is used with permission.

Read more at OpsLens:
Respect the Rank [5]
Dereliction of Duty [6]