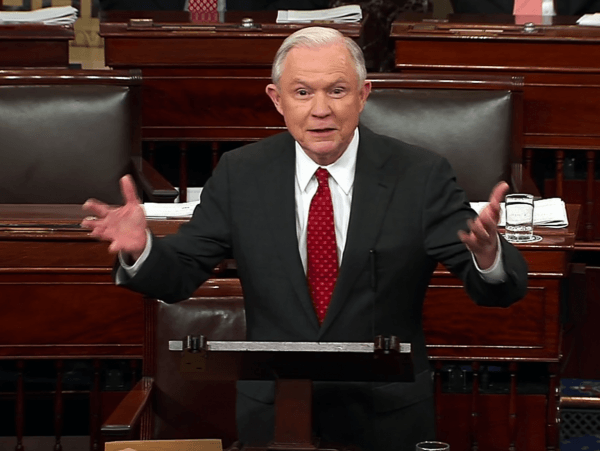 Alabama Sen. Jeff Sessions was officially sworn in as the next attorney general of the United States during a ceremony inside the Oval Office Thursday morning. President Donald Trump used the moment to reiterate that Sessions was a man of “integrity and principle,” and someone who has “devoted his life to the cause of justice.”

Sessions finally taking office comes at a key time for an administration beleaguered by lawsuits and insurrection from local governments refusing to abide by federal immigration law.

The Senate confirmed Sessions nomination with a 52-47 vote Wednesday after massive obstruction from Democrats.

Sessions, speaking at the swearing in ceremony, said he is ready to tackle a “surge in crime” across the country, representing a “dangerous, permanent trend.”

The Alabama Republican will also take over a Justice Department engaged in a legal battle over President Trump’s executive order to temporarily halt immigration from seven terrorism-compromised countries.

The president’s order was put on hold last Friday following a federal judge’s ruling that its enforcement should be halted. The left-leaning 9th U.S. Circuit Court of Appeals is expected to make its own ruling either to overturn or uphold the lower court’s decision in the coming days.

Trump has criticized the Washington State judge who blocked the order and suggested that a “bad high school student” could understand the president has the legal authority to halt anyone attempting to enter the U.S. in the name of national security.

“If the U.S. does not win this case as it so obviously should, we can never have the security and safety to which we are entitled. Politics!” Trump tweeted on Wednesday.

Prior to Sessions’ confirmation, the DOJ has been forced to rely on others to organize the defense of the president’s order rather than the attorney general. The New York Times’ Adam Liptak reported that the judges were skeptical of the Department of Justice’s arguments in favor of the travel ban, and that this battle is likely headed to the Supreme Court.

Sessions’ staunch background on immigration provides a much-needed boost for the Trump administration in this legal fight.

On the Senate floor, Sessions has argued that terrorists could use the Syrian refugee program as a way to infiltrate the United States. Sessions also indicated that a House-passed bill from 2015 that would have temporarily paused the acceptance of Iraqi and Syrian refugees did not go far enough.

“[The House bill] fails to defend the interests of the American people,” he said at the time. “It is based on a flawed premise, as there is simply no way to vet Syrian refugees.”

Sessions criticized Apple in the San Bernardino case for not working with the government and warned against any attempts to constrain the National Security Agency, according to a Politico report.

Sessions will also play a major role in restoring the morale of our nation’s police departments. While Obama politicized the DOJ, Sessions will have the authority to give more trust and confidence back to police at the state and local level as opposed to making police feel unimportant and undervalued.

Police officers in this country have been “unfairly maligned” in recent years, Sessions argued. “Morale in our police departments has suffered and they feel targeted,” he continued. Sessions argued a Trump administration provides a “wake-up call” that our men and women in uniform “must know they’re supported.”

Obama’s willingness to stretch his authority under civil rights statutes provides a perfect example of Obama’s disregard for the rule of law and state’s rights.

Aside from immigration, Trump and Sessions are closely aligned on several major issues that will shape this country going forward. Sessions’ confirmation is a much-needed win for the Trump administration, both legally and politically.

“Sen. Sessions brings a solid pro-life and pro-religious liberty record to the Department of Justice, which has been plagued for years by corruption and ideological policies that have undermined conscience rights and countless other civil liberties,” said Ashley McGuire, senior fellow with The Catholic Association.