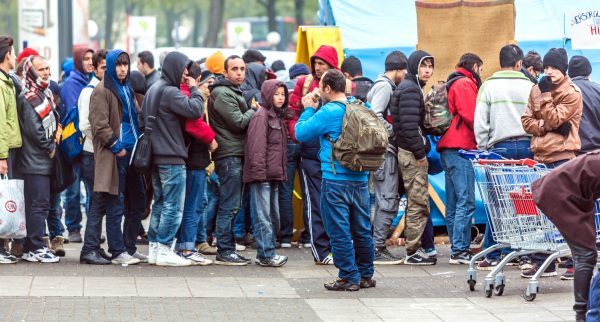 President Trump on Friday signed an executive order indefinitely halting the Syrian refugee program, barring all refugees for 120 days and prohibiting entry of all residents from certain high-risk countries for 90 days.

At a ceremony swearing-in Defense Secretary James Mattis, Trump said the suspension would allow time to improve procedures to screen for potential terrorists.

“I’m establishing new vetting measures to keep radical Islamic terrorists out of the United States of America. We don’t want them here.”

“I’m establishing new vetting measures to keep radical Islamic terrorists out of the United States of America,” he said. “We don’t want them here.”

He added: “We only want to admit those into our country who will support our country and love deeply our people.”

The order will cut the number of refugees America will take in the fiscal year that ends in September to 50,000, less than half the 110,000 limit set by former President Barack Obama. The plan includes exceptions for religious minorities claiming religious persecution.

Unless those countries provide within 60 days the information American officials request, their citizens will be barred from traveling to the United States.

“It’s a very good start forward,” she told LifeZette. “Our refugee resettlement policies have needed reform for a long time.”

A long list of liberal activists, however, lined up to condemn Trump. Wade Henderson, president and CEO of The Leadership Conference on Civil and Human Rights, called the policy discriminatory and ineffective.

“President Trump rode a wave of bigotry into the White House and ushered in a new era of hostility against American Muslims,” he said in a statement. “He campaigned as a demagogue and is now governing as a demagogue.”

“This is not what America is about,” she said in her own statement. “We stand strongly against these hateful actions, and in solidarity with our Muslim and immigrant neighbors.”

But Lopez said entry into the United States is not a right.

“It’s a privilege, and it may be decided by the people who come here,” she said.

Lopez said a pause in immigration based on geography, however, might not be the best approach. Instead, she said, it should be focused on ideology. She said consular officers and other State Department employees must be trained to suss out foreigners who could pose a risk to Americans.

That means asking questions about people’s belief in Sharia law, Lopez said. She added that other questions could focus on whether visa applicants believe in equality of men and women under law.

Such vetting would not discriminate against Muslims but would ban those holding “allegiance to a different legal system” incompatible with America’s democratic pluralism, she said.

“It’s not about religion. It’s about Article VI of the Constitution,” she said, referring to the a provision that America’s governing document is the supreme law of the land.

Trump signed a second executive order Friday, calling for a “great rebuilding of the Armed Services of he United States.”

Rebuilding the military was a key plank in Trump’s platform during last year’s campaign. On Thursday, he told Fox News Channel Sean Hannity that the military takes precedence [1] even over balancing the budget.