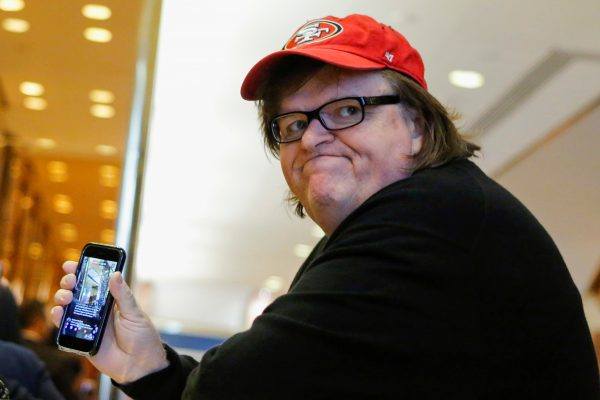 Michael Moore has done and said things since Donald J. Trump has been elected president that would have conservatives in heavily controversial waters had they ever treated Barack Obama in the same manner.

Moore previously tweeted out that he wanted to “disrupt” Trump’s inauguration [1]. He even linked to a group that said its goal was to stage protest and resistance actions on the day of the inauguration in order to force Trump’s swearing-in “behind closed doors.”

Now, Moore is calling for “100 days of resistance” against the president-elect. In a weekend appearance on MSNBC’s “The Last Word,” he encouraged citizens to attend the Women’s March on Washington on Jan. 21, which he will also be attending.

“This will have an effect. We need to throw everything at this. This man [Trump] is slightly unhinged, if I can say that, and he’s a malignant narcissist. He cares very much about what people think of him. He wants to be the popular guy. And he’s going to be very upset if there’s a lot of people there,” said Moore about the march.

Moore, gaining steam, then called for “100 days of resistance” and urged liberals to “get out of the couch” and protest. He called the march “the first full day of the Trump era.” He then corrected himself, saying, “The potentially short-lived Trump era.”

“We are going to be busy, busy, busy,” Moore said in reference to the first three months of Trump’s presidency.

“That’s the new Americana. That’s what’s going to happen. And people are going to be relentless about this, so I am optimistic,” he concluded.

Moore had previously used Donald Trump as a platform to relaunch his career when he released “Michael Moore in TrumpLand,” a last-minute documentary that arrived just before the election. Despite Moore’s pleas for a Hillary Clinton victory, Trump walked away victorious.

Since then, Moore has been as active in the media as he was when George W. Bush was in office. The big trouble with Moore at this point is his credibility. The avowed liberal took hard stances against the Bush administration — then appeared to crawl under a rock for the majority of the Obama years in Washington.

Obama was a disappointment even by the standards of his own campaign promises, but Moore turned his cheek. The wars he was so against raged on — and the surveillance state he warned about in the Bush era was injected with a shot of steroids. Yet Moore couldn’t find it in himself to passionately fight the power until Donald Trump came along and somehow set him off.

Besides the credibility issues, Moore is also revealing the very clear hypocrisy of the media. His words of “resistance” against Trump have been generic and concerning. If a conservative filmmaker ever said he or she wanted to “disrupt” Obama’s inauguration and force it “behind closed doors” — well, let’s put it this way: Some very harsh language would be used against them. There would be major consequences in the media. They’d be labeled treasonous and even potentially dangerous.

Now, Moore continues his airheaded talk with the “100 days of resistance” promise. The mainstream media, meanwhile, cheers this man on as if he never left the public eye and has always been fighting for the little guy.

We know too much about Moore to fall for this. His behavior during the Obama years versus the Bush years showed him to be a clear opportunist. His language in regard to the inauguration shows he is nothing but an attention-seeking individual, getting away with behavior and words no conservative public figure could ever use in regard to President Obama.