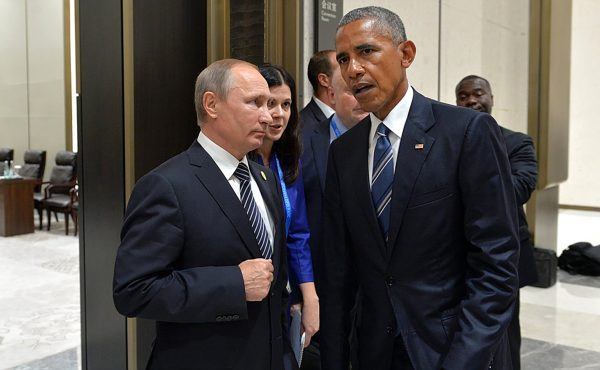 President Obama marinated in denial Sunday when he insisted to ABC’s George Stephanopoulos that he never underestimated Putin. This boast beggars belief — the equivalent of Neville Chamberlain bragging that he got Hitler right. No American political figure did more to enable Putin’s predatory behavior than President Obama. Democrats should first take the log out of their eye before accusing Donald Trump of not taking Russian cyberwar seriously.

Obama came to office blaming W. George Bush rather than Putin’s imperial ambitions for the deteriorating state of Russian-American relations. Obama called for “a reset in relations between the United States and Russia … a sustained effort … to expand dialogue and cooperation that can pave the way for progress.” The Obama administration spent the next eight years appeasing Russia — to no avail.

Thanks to Obama’s reset, Putin believes more than ever that he can achieve his consummate objective of reversing the outcome of the Cold War.

In 2009, Obama started off by canceling President Bush’s missile defense program for Poland, Hungary, and the Czech Republic, expecting in a triumph of hope over experience to elicit Putin’s cooperation in Europe and the Middle East. This betrayal demoralized and antagonized our most reliable European allies supportive of America’s vital national interest on a wide range fundamental issues ranging from Russia to keeping the European Union inclusive and pro-American rather than anti-American.

Then Obama’s negotiated a New START nuclear arms control agreement with Russia that Mitt Romney rightly labeled as one of the Obama administration’s worst foreign policy mistakes. New START curtailed America’s missile defense program and required the United States to build down our arsenal of missiles while allowing the Russians to build up theirs.

In March 2012, an open mic picked up Obama whispering to nominal Russian President Dmitri Medvedev, acting as Putin’s lackey, that he could be more forthcoming on making more concessions on missile defense after the election. Obama lowered the barriers to Russian aggression further by shrinking the American defense budget — while Putin has made restoring Russia’s military might a top priority. According to Nikolas N. Gvosdev — formerly editor of the National Interest — “Russia is now engaged in the largest military buildup since the collapse of the Soviet Union more than two decades [ago], with major increases in defense spending budgeted each year to 2020.” Oblivious, President Obama doubled down on the reset during the third presidential debate of 2012, chastising Mitt Romney for calling Russia a major geopolitical threat.

Meanwhile, Putin responded to Obama’s policy of appeasement with nothing but mounting defiance. He banned Americans from adopting Russian children and gave asylum to whistleblower Edward Snowden. He blocked any effective military action against Bashar al-Assad’s murderous military dictatorship in Syria, another traditional Russian ally who shares Putin’s anti-American animus. Throughout the escalating Syrian civil war, the Russians have bolstered Assad, shielding him from the consequences of using chemical weapons against his own population, flaunting President Obama’s red line. Obama’s precipitous withdrawal from Iraq and naive reliance on Putin as an honest broker has facilitated Putin’s grand scheme of having Russia replace the United States as the dominant power in the Middle East. To that end, Putin has systematically hindered American efforts to prevent Iran from crossing the nuclear threshold, providing, for example, the Iranians with antiaircraft missiles raising the cost of any attack to destroy Iran’s nuclear capability.

Obama’s feeble response to Putin’s implacable campaign to dominate Ukraine drives the nail in the coffin of his audacious claim that he did not underestimate Putin’s ambitions or malevolence. Obama and Secretary of State John Kerry seem not to care or understand the high stakes involved in Ukraine’s struggle to remain free and become part of the West. As Zbigniew Brzezinki observes, Russia without Ukraine “ceases to be a Eurasian empire … However, if Moscow regains control over Ukraine … Russia automatically gains the wherewithal to become a powerful imperial state, spanning Europe and Asia.” Our moral interest in keeping Ukraine free looms equally large. No group has suffered more from Russian domination — including Stalin’s collectivization campaign in Ukraine, murdering millions.

Even so, President Obama persisted with reset until the president belatedly impose weak sanctions on Putin after the 2016 election, mainly out of personal pique for his opposing Hillary Clinton rather than any strategic calculation. When it counted, Obama resisted all calls — including from a growing number of his advisers — to provide arms for Ukraine so it could defend itself against Russian military aggression. Obama resisted all calls for imposing sanctions with teeth on Russia’s banking and energy sectors — the only types capable of imposing significant costs on Putin’s regime. He refused to reverse his decision to cancel the deployment of missile defense in Poland, the Czech Republic, and Hungary that so alarmed and demoralized these allies now increasingly doubtful of America’s capability and resolve to defend them against an illiberal Russia with swelling ambitions.

An insidious combination of Obama’s arrogance, weakness, and cluelessness about the malevolent essence of Putin’s regime has enabled the Russian tyrant’s short-term goal of humiliating NATO, neutering American power, and instilling fear in his neighbors. Thanks to Obama’s reset, Putin believes more than ever that he can achieve his consummate objective of reversing the outcome of the Cold War. No wonder Putin thought he could wage a cyber campaign to delegitimize the outcome of the 2016 presidential election.

President Obama and his liberal Democratic supporters should look in the mirror — rather than scapegoat Donald Trump — to understand what gave Putin the idea in the first place that he would face no consequences interfering with our election. Trump’s Inauguration Day cannot come soon enough to end the agony of President Obama’s dismal presidency.

Robert G. Kaufman is a professor at the Pepperdine University School of Public Policy and author of “Dangerous Doctrine: How Obama’s Grand Strategy Weakened America.”